You are here: Home » Impact beyond the life time of TD1210 » Twisted ways of impact – SOFA 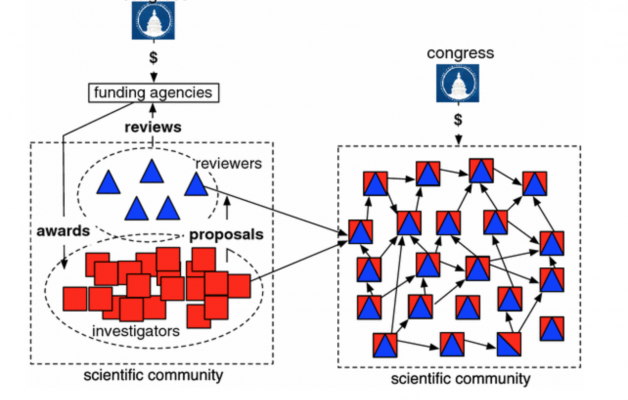 Beginning of October 2017 a news item of our Dutch main funding organisation NWO caught my eye. The title reads in English “Measures of NWO to reduce proposal pressure.” With it came an extensive 12 page report (albeit available in Dutch only) based on a series of conferences NWO organised. The report contains an analysis of the current funding situation and its implications on proposal writing researchers, reviewers and the funding agencies itself. It also argues for  (1) measures which NWO is going to implement; (2) measures for which NWO states the need for further investigation; and (3) measures not yet to be implemented. Among category 1 one finds, for instance, the postponing of a call if it becomes evident that due to available budget and submitted proposals the success rate will be below 25%; but also the pro-active moderation among competing consortia by an independent commission. Among the category (2) I read, among others, about new models for funding, such as “Self Organized Fund Allocation”.

This is an idea Katy Börner proposed at the Lorentzcenter workshop “Simulating the social processes of science” in Leiden April 2014, which was organised by Bruce Edmonds and others at the very beginning of TD1210. Already at that time in collaboration with TD1306 PEERE.

Simulating the Social Processes of Science – a summary

I became curious about the way of information transmission from Katy’s keynote talk at a workshop in The Netherlands to a science policy document of the Dutch funding agency.

The NWO report contains a reference to a Science article about this model written by Jop de Vrieze (Vrieze, J. (2017). With this new system, scientists never have to write a grant application again. Science. doi:10.1126/science.aal1055), which already discusses the attitude of NWO towards such models. Reading this text further it becomes apparent that the credit to raise attention to this work among the Dutch science policy circles belongs to Marten Scheffer, Professor for Ecology at the Wageningen University and Spinoza price winner.  But, the scientific paper cited in the the Science article (Bollen, Johan; Crandall, David; Junk, Damion; Ding, Ying; Börner, Katy (2016) An efficient system to fund science: from proposal review to peer-to-peer distributions. Scientometrics. doi: 10.1007/s11192-016-2110-3) belongs to a special issue (Börner, K., Edmonds, B., Milojević, S., & Scharnhorst, A. (2016). Simulating the processes of science, technology, and innovation. Special issue. Scientometrics. http://doi.org/10.1007/s11192-016-2103-2) which was supported by TD1210 (see Editorial).

It is this kind of impact projects aspire to achieve, funders are proud off, and which still are so difficult to be traced. The reason is that it is not often one event, or in network-speak not one single path which leads to something, but many, sometimes independent, sometimes interrelated events.

The actors involved might be the best to reconstruct such impacts, but to make them reporting to all different funders involved seems to be a hopeless enterprise. Maybe this is why a system of self-reporting of impact available also years after a project has ended is not a bad idea. (see for this The Social Impact of Science Repository – a result of the ImpactEV project) Or we can leave this kind of reconstruction to science historians and go on with actual research itself.

After the COST Action

Knowescape.org has function as communication platform for the COST Action TD1210 which ended in April 2017. Having said this the collaboration network we established in...read more →

Reproducibility in Scientometrics – special track at the STI2018