You are here: Home » STSM » Complexity in the Digital Humanities – A report from Vincent Traag on the workshop November 7, 2013 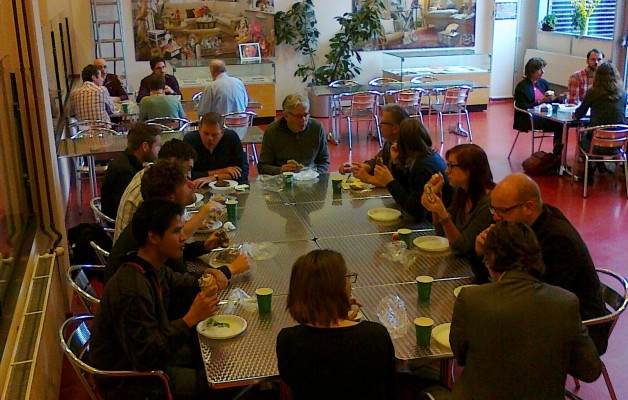 We live in a complex world. Yet complexity is hard to pin down. In fact, it is quite complex to make the notion precise, making it in some way a self-describing word. Generally, complexity is thought to exist somewhere between random and regular, and consists of interactions among many constituents. Let’s take text for example. Obviously, text consists of words and the relationships between them (for example, their order). Moreover, words don’t appear completely at random, yet are not completely regular either. Rather, its structure is determined by the finesse of authorship. Of course looking at a text in this way, void of semantics, greatly reduces its richness. Nonetheless, we may study this structure so as to understand some of its intricacies. Various subjects in the humanities (and in the social sciences alike) could benefit from this way of looking at things.

The e-Humanities group in the Meertens institute organised a workshop last November 7 which revolved around complexity in the digital humanities. Contributions varied from music and literature to networks and historiography. The morning of the workshop was largely devoted to text and music. Some structural properties of languages seem to be universal, such as the famous Zipf law of word frequencies. Others focused more on complexity of text in terms of its syntactic structure, also relating it to readability and how “literate” a novel is. Another way of comparing various texts is by looking at motifs, such as the “wicked stepmother”. Of course languages are by no means static, and uncovering the dynamics of language evolution should make an interesting research topic. Music was investigated by both looking at how various compositions related to each other, and by investigating the structural properties of various folk songs.

The afternoon consisted of more diverse topics. One interesting paradox was presented, namely how can cultural diversity in the long term co-exist with coordinated action in the short term? The answer lies in the specific hierarchical structure of cultural preferences, which influences how collective behaviour is shaped. This hierarchical structure also seemed to be present in a large catalogue of cultural objects, suggesting that such hierarchies are present in various cultural domains. One of the problems when looking at this from an historical perspective is that definitions and descriptions change, which was presented on census data. Often, hierarchies are also naturally present in human relations, where we often discern upper, middle and lower classes. One presentation focused on trying to find the “highest” class in social networks: the elite. Finally, the geographical spread of the Slow Food movement was investigated by focussing at local differences between various chapters of the movement.

In conclusion, the diversity of topics being covered during the workshop showed that complexity is indeed present across the humanities. Let us hope that by sharing our different perspectives we all have learned.

Scientific report of the STSM at ISI Torino, 15-28.03.2014 In the last few years, the continuous development of ICT has led to a change of...read more →

The DERI institute of the National University of Ireland, in Galway, is one of the biggest Semantic Web groups around. Their research spans across most...read more →