You are here: Home » STSM » Notes on a STSM in Lucca 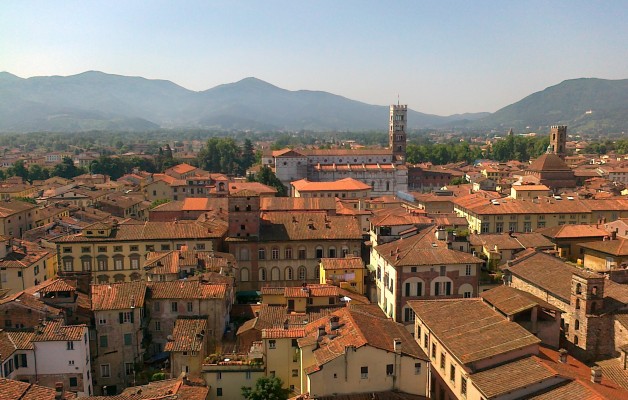 Let me start with the most important note to myself: do not go to Lucca in February. Ever. It rains. Then it rains some more. And it is cold. Really cold.

Then the second most important note: go to Lucca again. At your earliest convenience. Make sure to pick up a time when the weather is sunny, not rainy.

And the last one: Do take a walk on the city walls. When will you ever get a chance to walk around a city again? Never?

Aside these three important notes to myself, what happened in Lucca? What did we do, what did we learn from my one week long STSM there? First of all, as planned, I gave two talks, to which mostly students from LYNX (Center for the interdisciplinary Analysis of Images) attended. My first talk was on a project I have been working since more than 3 years now, and was titled “Applying cultural analytics to social networking sites: The case of deviantArt”. The abstract of the talk will give enough insight on the project:

“Humanities and social sciences require new research approaches to deal with and to benefit from the explosion of digital media. Thanks to large scale data storage and processing, close reading of individual items can be supplemented with analysis of broader trends from massive amounts of data. Cultural Analytics (CA) is a recently developed methodology for the exploration of content and visual form in large image and video collections. It has already been applied to variety of media types, including TV programs, feature films, newspapers, and video games. However, until now these applications did not take into account the social context of media. In many cases, media artifacts under scrutiny are generated or used by people in a social setting, either in forms of (digital) communities, or in terms of social relations, which can be also analyzed as a valuable source of information. Social network analysis (SNA) is a set of methods for the analysis of human networks, including massive online social networks. For adapting cultural analytics methods to SNA, network, image and text analysis should be used in conjunction with domain-specific knowledge. This talk summarizes our research on deviantArt, the largest online arts community and positions cultural analytics within digital humanities.”

As for this research I mainly use image processing and analysis techniques, the topic in question was fitting to the agenda of LYNX, and encouraged the students to talk about their own dissertation topics after the talk. I also found the chance to interact more with the students and saw that using such computational tools would help to facilitate their research as well. The next morning, I’ve also met Prof. Catoni, the director of LYNX.

The topic of my second talk was also the primary reason of my STSM; here is the abstract of it:

“Thomas Laqeuer, a well-known historian and sexologist, argued that sex, like gender, is a build construction, at least in the Western World. This argument is based on his meticulous study of Western Medicine from Ancient Greeks to today. According to Laqeuer, there is a one-sex model, in which the woman & man is described to be the same, and their differences are perceived to be from the same mold, but women are at one end of the equilibrium, and men are at the other end. Around 19th century, this understanding has shifted to a newer model, a model which Laqeuer terms as two-sex model where man and woman started to be perceived as distinctly different, in fact as two separate entities. Laqeuer furthermore claims that this shift not only occurs in the medical world, with the scientific advancement but in society at large. However, his arguments are based solely on his research on medical texts. In this STSM, we would like to expand and test Laqeuer’s theory with Google’s ngrams dataset, a dataset that reflects not only the medical opinions, but culture at large.”

During my stay in Lucca, I had meetings with Alexander Petersen and Orion Penner as well. After all, they are my project partners in analyzing Thomas Laqeuer’s theory. (And they are excellent hosts!). During those meetings, we first of all tried to set-up a project agenda and to this end, we have talked about possible ways to acquire, analyze and visualize the Google n-gram data set. We also searched for alternative data-sets to support our scrutiny of Google n-gram dataset, since n-grams data set have some serious shortcomings.

At the time of my arrival, Orion Penner already had an algorithm written to download and extract keywords from the Google n-gram dataset. Hence, in our first meeting, we discussed which keywords would give us insight into the transition from ‘one sex’ to ‘two sex’ position, and how we could capture this transition linguistically. We had many ideas to test, and we already started with the digitization of Laqeuer’s book Making Sex from which we will extract references to medical texts. The book itself, and the referenced sources will be used as a starting point in listing keywords to search in n-gram dataset. And that is the first step in our agenda. More will surely follow. In short, I can say that the STSM in Lucca, in spite of the weather, was very fruitful.