You are here: Home » Knowledge maps » Walking through Reykjavik – thoughts on story telling and knowledge maps 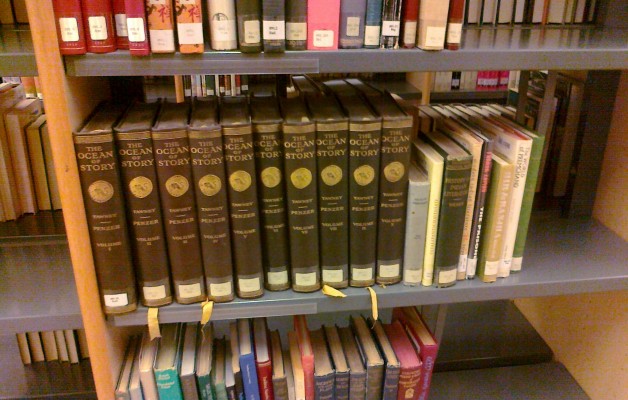 Iceland has a rich cultural heritage and a very interesting history. At the National Museum of Iceland, I visit the permanent exhibition The Making of a Nation.  This exhibit is the most fabulous piece of story telling in a museum I have recently encountered. Based on an undisturbed balance of old and new media use, the exhibit presents objects and provides rich textual descriptions for the old-fashion museum visitor, but it also displays one of the best historio-documentary films I have ever seen. One intriguing example I watched is about making, documenting and archiving the Icelandic census of 1703, the oldest census of the world, for which people have been counted by names (!) resulting in a number of 50358. The interactive films or better multimedia shows, running on touchscreens, have been made by Gagarin, on which website an overview and snapshots from the National Museum project can be found.

Scrolling through the National Library at another evening a book series catches my eye, called “Ocean of Story”. Ocean of streams of stories or Kathasaritsagara is a famous Sanskrit 11th-century collection of Indian legends, and I just look at an edition by N. M. Penzer from 1924 based on C.H. Tawney’s translation in 10 volumes, available also at the Internet Archive. In the introduction I read the lines: “Knowledge is Man’s highest beauty, Knowledge is his hidden treasure, Chief of earthly blessings, bringing Calm contentment, fame and pleasure.” There is a link between our attempts to create knowledge maps as orientations into knowledge, and those early texts, which with words aim the same we aim with visual language: enlightening, knowledge, experience, insights.

Once more I run into story telling and maps in an exhibition in the Culture House about Medieval Manuscripts – Eddas and Sagas. The Icelandic Saga’s are at the same time stories of settlement, stories of genealogy, stories to form a cultural shared canon. Knowledge maps should contain the same elements: histories of main ‘invasions’ – and invaders – in territories of knowledge, sketches of the coast lines of the land to be explored and the landing points, reference systems for shared knowledge and basic science-references. Science maps provide bits and pieces of it, question remains: can they be turned into navigational tools?

After the Third Annual Knowescape Conference – a report from Mons

During my stay in Amsterdam from 11st to the 17th of April 2014 I had the chance to exchange and discuss visualization as well as...read more →

Rationale Systems to organise our knowledge are as old as knowledge production itself. Today we talk about knowledge graphs, and in them library classifications stay...read more →